For almost a year now I've had my ID-800H installed in my van, in a the old cassette holder. 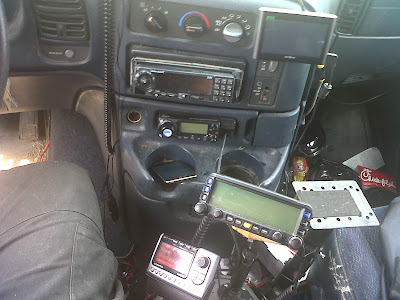 This setup worked great till about 3 or 4 weeks ago. When while mobile I got nothing but R2D2, and I mean 98.99% was un-readable. So I thought that maybe the antenna connector on the back of the radio had come loose as they sometimes do on mobile installs. IT had not in fact it seemed to have tighten. So I started to look else where, thinking what had changed - nothing I could think of. 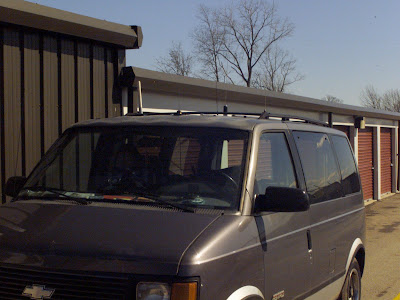 This is my old van, but the antenna in the center is the one I moved over to the new van, it's is just a 2meter antenna, and on my ID-800H I only used 2 meter... But I had considered maybe the antenna had just gone bad. I went and bought a new antenna. No Joy, it wasn't the antenna. 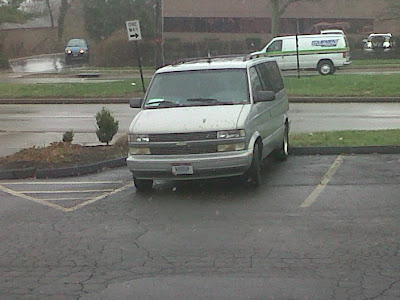 I don't have any pictures with the replacement antenna. But it is a 2m/440 short antenna.

I decided that maybe the mount or coax were the problem. For a year I just had the coax going into the door jam, I know, not good. I always wanted to put a NMO roof mount on it, so this seemed like the prefect time to get rid of the mag mount, and go NMO roof!

It was surprising easy to install a NMO roof mount, and I wonder (NOW) why I didn't do this a long time ago...guess because I thought it would be much harder to do!

Link to the picture is here NMO Roof Mount

Now works great, but once again while I was sitting, not moving. As soon as I moved I got nothing but R2D2 again. Now, I am thinking....what else could be going on.

And I don't know the anwser, I am wondering if the SQL is some how out of wack, or maybe a filter in the 800H, or maybe something in the dash has changed and is causing noise. Now I have listened to both the data-stream on my ID-800H, and on my FTM-350R in analog to me and my ears they sound the same, but just because I don't hear any difference doesn't mean a "machine" wouldn't hear something different.

Today when I ran the coax, I realized, and remembered that there is/was a remote starter installed on that van, the previous owner lost the remote so mainly it's a useless feature. IT was right next to the radio in the dash. Did not look like it moved, but I removed it today thinking that maybe it is causing some type of interference. I also took the radio out of the dash, and it is sitting on the seat next to me now. And Tomorrow when I take my wife to work I will see if out of the dash makes a difference. IF so I will put it back in the dash, and see if it was the remote starter.

I have tried this on different D-STAR repeaters, I am about 30 miles from the repeaters (one in Dayton W8BI, and one in Cincinnati K8BIG)

I also might note that I don't have any issue with any of the ananlog side of the radio.

a couple of weeks ago I posted 3 videos at various points in the city, and while driving.

They can be found on my youtube page Here! and were recorded using my cell phone...

Yes, I am frustrated, and I am hoping someone else might have some idea as to what might be going on here.