After reading N4TRQ's blog about getting the ISS on his HT with a rubber duck, I wondered why I had so much problem getting it using my HT and the arrow antenna, SO I went out and gave it a try.

The 1st pass was at 83 degrees, and I was sitting at my home QTH. 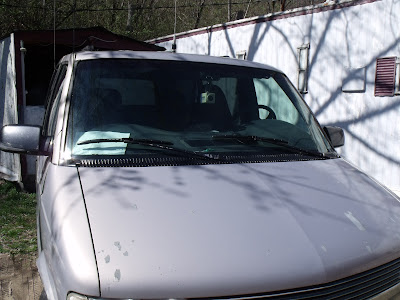 It was pretty successful.

Still made me wonder why I had such a hard time working the ISS with my arrow.. Anyways, There was a 2nd pass coming up today, and I just knew I had to get in on it! Never working a satellite while mobile made me want to try it all the more.

This pass was also coming over top of N4TRQ location a few minutes after it passed me. I wanted to try to send a message again. I wanted it to work!

N4TRQ's video: He is working the same pass, at about the same time


Pretty amazing really, considering we had not planned this, thou I did know he was going to be listening to the same pass I was going to be on! All in all thou, really good! I've decided that I probably need to be sitting thou to really decode the APRS packets from ISS, not sure what is going on there, maybe because of a lot of movement and Doppler effecting VHF the way it does?

Anyways, here are some screen grabs after I got home - the 1st is from findu - it just shows that I was there! You can also see a few calls down from mine - N4TRQ-7

This one is the Findu map - my call is a little behind someone elses, but you can clearly see N4TRQ-7 on the east coast.

The last is my raw packets from aprs.fi -