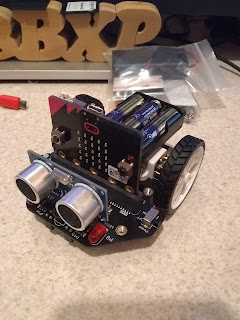 
The Micro:Bit is setup to use Microsoft:MakeCode or Scratch and Python.
The Sandee P Mistry Board core lets us use this board with the Arduino (C style) language as well.


General Information:
I used the general information that is found either in the Maqueen MakeCode library on the board itself, or from trial and error to come up with something that works (mostly) with the Arduino IDE.
https://www.dfrobot.com/wiki/index.php/Micro:Maqueen_Robot_Car(V2.0)_SKU:_ROB0148#Ultrasonic_Obstacle-avoiding and the library here:
https://github.com/jhlucky/maqueen/blob/master/maqueen.ts


Working (or mostly working):
What’s not working: (These things work if you use MakeCode, but so far I’m unable to get them to work with Arduino).

Basic Sketches:  (To be duplicated)


The compass and accelerometer on the Micro:bit also work, as well as the LED Matrix and the two buttons on it.  *The Compass is in the wrong orientation to be used as a true compass, but it maybe able to be used to do relative positions, I will have to test that more.*


I am in the process of making a library and attempting to duplicate the applications in the DF  Robot wiki. It is not even close to being ready. I’ll post a link when it is ready.


This was very easy to port over to the Arduino IDE, the buttons are all HIGH until they are pushed then they go LOW.
I may not be able to use this as intended because I am having problems getting two Micro:bit to communicate directly with each other.


A game or something may be coming thou...we will see